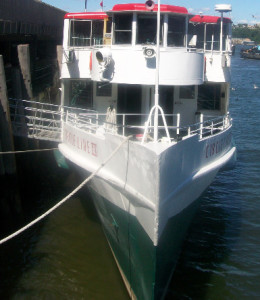 Manhattan is an island, so it’s probably not surprising that one of the best ways to see it is by boat. But it might surprise you to learn how many options there are now for exploring the New York waterfront–and how inexpensive they are. With several school half days and full-day closings in the offing, there are plenty of choices for a quick day trip close to home.

Let’s start with the cheapest: The Staten Island Ferry, which is free. When I still lived in the city and had a cranky toddler to contend with, I would load him into the stroller and head for the Whitehall Terminal at the tip of Manhattan. When it’s not rush hour, there are plenty of window seats and you can ride back and forth as many times as you like. The trip over to Staten Island takes about 25 minutes, and you get a bird’s eye view of the Statue of Liberty and Governor’s Island, and all the harbor traffic in between.

Also free: the ferry from lower Manhattan to Governor’s Island. The former Army and Coast Guard post has been open to the public since 2003 and if you bring your bikes along (or rent them there), you can pedal for hours on flat pathways that are completely traffic free. But Governor’s Island is only open Fridays, Saturdays and Sundays, and only until October 10. It won’t reopen until next June.

For $6-$10 a person one way, you can cruise directly from the Jersey side of the Hudson. New York Waterway boats leave from Edgewater, Weehawkin, Hoboken and Jersey City for trips to 39th street and the Wall Street area. The fare is cheapest if you go from the more southerly N.J. terminals to lower Manhattan, but you might be able to save a few bucks by buying a 10-trip book.

There’s no guided tour on the commuter boats, so if you want information on what you’re seeing, you’ll need to go over to the Manhattan side of the Hudson and take a tour boat. New York Waterway runs tours from both its midtown and downtown terminals. The latter costs $14 to $18 a ticket, while uptown’s 90-minute skyline tour is $15 for kids and $26 for adults. Then there’s the grandaddy of New York harbor cruises, the Circle Line. Its itineraries range from a 75-minute cruise around the Statue of Liberty to a three-hour ride that goes completely around Manhattan, the only boat tour company to do so. In the summer, you can also take a 30-minute speedboat ride on something called The Beast. There’s a coupon in the KidStuff book for the Circle Line and that helped us to save quite a few bucks two weekends ago.

But while many of these boats go near the Statue of Liberty, the only way to cruise onto Liberty Island is through Statue Cruises. Its boats depart from Liberty State Park in New Jersey and Battery Park in Manhattan, and include Ellis Island as well. Ticket prices start at $5 for children and $12 for adults.