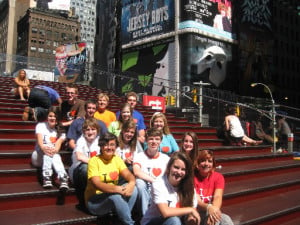 Verona students Sean McGinley and Michael Hardenberg are performing in a Broadway musical revue on Sunday, September 26 at The First Presbyterian Church, 326 Bloomfield Avenue in Caldwell. There will be two performances of “Lullaby of Broadway – Cabaret 2010” at 2 p.m. and 7 p.m.and the suggested donation is $10.

The production features such musical classics as “West Side Story”, “Meet Me in St. Louis” and “Annie Get Your Gun”, as well as contemporary favorites like “Godspell”, “Urinetown” and “Wicked”. The 24-member ensemble is composed of youth from surrounding communities. McGinley, a Verona High School senior, has participated in the church music program since he was three years old. He recently portrayed the role of Teyve in the 2010 youth musical production of “Fiddler on the Roof.” He will be singing Where is the Life That Late I Led from “Kiss Me Kate” and will be the featured soloist in the “West Side Story” number Officer Krupke. Hardenberg, a VHS sophomore is featured as the lead singer in Run, Freedom, Run from “Urinetown” and in a scene from “Parade”. He played the role of Feydka in last year’s church musical.

Former Verona resident Adriana Piercy is the production’s director and choreographer. She is currently dancing professionally with the Miami City Ballet. The performers are members of the church’s Westminster Choir and invited youth from the community. The choir travels annually and has performed throughout the United States and abroad during February school breaks. This year, it will be performing “Godspell” at host churches in southern Florida. Call 973-228-0310 for further information or visit the church Web site.