Sneak A Peek At The Band 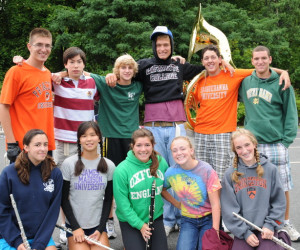 The Verona Marching Maroon and White will give a free preview of its fall show, “Tchaikovsky Resurrected”, tomorrow night (Thursday, August 26) at 8:30 p.m. on Centennial Field. That’s the turf field with the klieg lights behind the Verona Community Center, and it’s supposed to be a rain-free evening (really!). This year’s drum major is Daisy Bourne, and she’ll be assisted on the field by Greg Keating and Matt Tischio. Just keep in mind that the performance on Centennial is something of a dress rehearsal, so band director Erik Lynch may be stopping and starting it until things are just right.

In addition to playing at home games of the Hillbillies football team, the marching band has a full schedule of competitions. They kick off with the Festival of Bands, which VHS will host on Saturday, October 2. The gates for this multi-band event, which is a major fundraiser for the Verona Music Parents Association, will open at 5:30 p.m. We’ll bring you all the details on the festival lineup as soon as they are finalized.

The following Saturday, October 9, the band will be competing in Montville, and on October 16, they will be in Mount Olive. On October 24 the competition is in Sewell, N.J., before the season ends October 31 in Allentown, Penn.

You can follow the band through the Web sites of the VHS Instrumental Music Department and the Verona Music Parents Association, as well, of course, in the pages of MyVeronaNJ.com. In the meantime, enjoy these pictures of August’s band camp, taken by band parent John McClellan.