Ken McKenna To Resign From Council 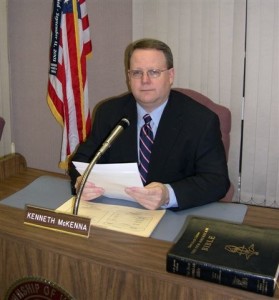 Ken McKenna, who has served on the Town Council since July 2005, will be resigning from the council at its September 20 meeting. McKenna, who held the title of mayor from July 2007 through June 2009, will be moving to Berkeley Heights.

McKenna’s current term on the council was to have expired in June 2013. It will now be filled through a two-part process. First, the remaining council members will appoint a new member to serve in McKenna’s place through the next election in May 2011. Then, at that ballot, interested candidates may vie for the remainder of McKenna’s term. Mayor Teena Schwartz and Council Member Frank Sapienza are also up for re-election next May. Council terms are for four years.

Reflecting on his time in office, McKenna, who is the executive vice president and chief financial officer of of the auction house Doyle New York, says he is “proud of restoring a sense of teamwork and cooperation among the members of the Council”. He also takes satisfaction in the work he did to maximize the recreational and financial potential of the Hilltop property for Verona and in the work done to improve our roads, including the Bloomfield Avenue streetscape.

“Ken McKenna has made an enormous contribution to Verona as a volunteer, a member of the Lion’s Club and as a member of the council,” said Joe Martin, the township manager. “He is highly analytical and a very effective decision-maker. I wish him all the best.”

If you are interested in serving as an interim replacement for McKenna, send your resume to Town Clerk Jean McEnroe at 600 Bloomfield Avenue, or e-mail it to [email protected].