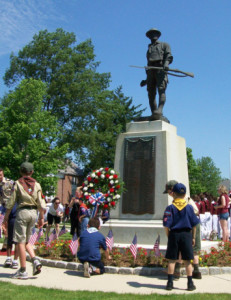 A report in today’s issue of the Star Ledger says that Angelo Otchy, who received a medal in Verona’s Memorial Day ceremonies this year, fabricated stories about his service in Iraq.

While Otchy did serve half a tour of duty in Iraq, the paper says he was not a survivor of a Humvee bombing, as he had claimed in a Memorial Day interview with the Star Ledger. The bombing, on June 14, 2007, claimed the lives of three U.S. soldiers, including SPC Farid Elazzouzi of Paterson.

The paper also cast doubt on a story that Otchy told reporters after the terrorist attack on the World Trade Center on September 11, 2001. He claimed that he was part of a search-and-rescue operation there. Two Verona residents, William J. Erwin and Stephen L. Roach, lost their lives on 9/11; Howard Kestenbaum, a member of Verona’s Congregation Beth Ahm, also lost his life that day.

According to the Star Ledger, Verona allows veterans to nominate themselves for the town’s Distinguished Service Medal, but they must present honorable-discharge papers to show they served in the military. Verona Town Manager Joseph Martin, a Vietnam veteran, termed the disclosure about Otchy “very sad”, but told the Star Ledger that Verona would not rescind the award.

Previous articleOLL Alumni Get A Facebook Group
Next articleWhere In Verona Is This?