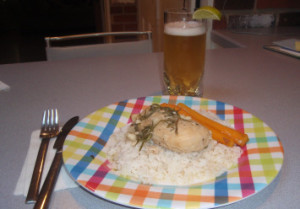 I was searching around for slow cooker recipes and thought the Food Network‘s Web site was good place to start. There’s always so much hype around those recipes.

I came across one that had so many bad reviews, and I mean really bad reviews, that my competitive nature just kicked in and I felt I had no choice but to see if I could do better. I had another reason for wanting to make it: I had grown garlic in my herb garden this year and really needed a recipe that required a lot of garlic. Looks like I found it.

You can see the original recipe here; below is my revised one. This dinner turned out delicious and was so easy to make. Great for a day when you really don’t want to throw dinner together at the last minute and don’t have a lot of time for prep work.

4 skinless boneless chicken breasts (or more if you need them)

1 onion cut in half vertically then thinly sliced

8 cloves of garlic, peeled and smashed  then coarsely chopped

8 carrots, peeled (I bought a big bunch at the farmer’s market and needed to do something with them)

The original recipe called for cooking the rice in the slow cooker with everything else. In my house, dinner time varies from night to night by about an hour. I made rice on the side. No need to complicate things.

In an effort to capitalize on the flavors of fresh garlic and onion,  I chose to saute the onion and garlic first, which was not part of the original recipe. From experience, raw onions thrown into a slow cooker produce a very strong smell that is not nearly as delicious as when they are pre-cooked.

I love that the recipe does not require precooking the chicken.

As for the vegetables in the recipe, I added carrots because I had them. Depending on the vegetables and how much time you have to plan ahead, you could add just about anything that’s in season now: string beans, wax beans, corn, zucchini, yellow squash or tomatoes. For most of them though, I wouldn’t add more them more than 30 to 40 minutes before you plan to serve the meal.