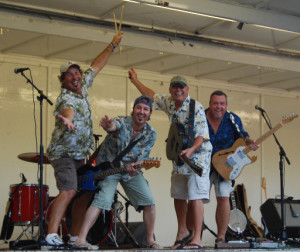 First, a round of applause for whoever it was who proposed holding one of Verona’s summer concerts at Verona Pool instead of at the Civic Center.

Then, another round of applause for Jimmy Hill, Jack O’Neil and the entire Lakeside Deli team for a delicious dinner menu. Oh, and Joey Arminio, who even though he had only come to the pool to relax, went home to get his sax and played with a band he has gotten to know well over the years. And the Verona Fire Department, which sent a squad to check up on the transformer fire outside the pool building; it barely put a dent in the festivities.

And finally, a round of applause for all the folks who came out and enjoyed Jimmy & The Parrots, the Jimmy Buffett tribute band that played at Verona Pool last night. They truly got into the spirit of the evening, dancing and splashing to the music, even if some of them tried to bring in beverages more suited to Margaritaville than the pool concession stand. We hope you got your coolers back later.

Dan Robinson was poolside with his camera and took these great shots. Thank you Dan!