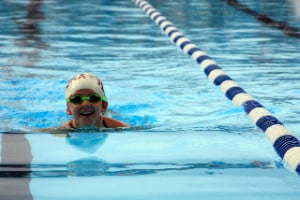 It’s been an up and down season for the 2010 Verona Waves swim team. The Waves won both of their meets against Mountainside and split their face-offs with South Orange, but were defeated by Maplewood and Berkeley Heights. The 190 swimmers on this year’s team made it the largest team that Verona has ever fielded in the sport–and quite possibly the largest for any Verona sport.

The Verona Waves program, which has traditionally had a width swimming program for beginners as well as a competitive team, expanded this year to include a team that competed only at home races in Verona Pool. Practicing five days a week beginning at 8:30 in the morning, swimmers from elementary school through high school perfected their breaststroke, backstroke, freestyle and butterfly swimming, and learned to compete in medleys and relays.

“We are very pleased with the way swim team ended up this year,” says Jacqueline Iannucci, who coaches the team along with Chrisann Papera. “The swimmers seemed to really enjoy practices, races, and the camaraderie that come with being a member of the swim team. We saw a lot of improvement in the swimmers this season and we hope that they all come back next summer.”

As you might expect on a team this large, there were many standout swimmers this year, including Olivia Fisher, Matt McNally, Will Sheehan, and Nick Giuliano in the 8 and under group; Carly Waterman, Dario Spina, Cole Smith, and Matt Dillane in the 9-10s; Melissa McLoughlin, Mike Mughetto, Brendan McNally, Thiago Queiroz, Mike Dillane, and Paige Ferrell in the 11-12s; Kristin Visentin, Nikki Creech, Tyler Petersen, Danny Molloy, Maureen O’Toole, and MJ Mughetto in the 13-14s; and, in the 15 and up group, Samantha Bahr, Brendan Gordon, Ryan Gordon, Nick Hennig, Jimmy O’Toole, Liam O’Toole, Kim Petersen and Cristiano Queiroz.

Most of the team should be back next year after spending the winter and spring swimming with the Caldwell Cyclones, Montclair Kimberley Academy’s Cougar Aquatic Team, Montclair YMCA Dolphins and Montclair State University’s Red Hawks Swim Club. But Jimmy O’Toole, Sara Guarducci and Christine Maccia are off to college, as are the Gordon brothers.

Many Verona Waves swimmers will be in Verona Pool at 7 a.m. on Monday morning warming up for the Divisionals, a championship for their league in which the swimmers compete as individuals. The team’s top 12 swimmers will compete in the Meet of Champions on Thursday.

The Verona Waves team has strong support from parents like Susan Frizzi, whose daughters Giuliana, Emilia, and Clara all swam this year. Says Frizzi, “It’s the only sport you can do that will save your life.”

Enjoy these photos of the 2010 team, taken by Audra Elliott and Susan Maccia. If you have team photos you’d like to share, send them to [email protected].