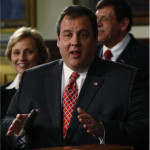 Late last week, Gov. Chris Christie unveiled a proposal to limit the pay of school superintendents across the state. The salary cap would range from $120,000 for school districts with fewer than 250 students to $175,000 for districts with up to 10,000 students.

According to the state, 366 school superintendents now earn more than the proposed salary cap would permit. The state pegged the average salary for superintendents in districts with over 1,000 students at $192,764. Verona, which will have a projected 2,133 students enrolled this fall, would have a salary cap of $165,000, which is exactly what Superintendent Charles Sampson earns now. Sampson also voluntarily pays 1.5% pays of his salary toward his health care coverage, even though superintendents are not, unlike teachers, required by the state to pay into their health insurance. Sampson gets no other benefits specific to his contract other than professional affiliation fees.

The governor’s plan brought a swift rebuttal from John Quattrocchi, president of the Verona Board of Education, who termed it “arbitrary and counter-productive.”

Quattrocchi agrees with the governor that New Jersey is in terrible financial shape and that many districts are wasteful and lacking in accountability. But he notes that New Jersey spends about $10 billion per year on education, some 60% of which goes to just 60 or so of the the 566 towns in the state. Quattrocchi says that going after superintendent raises would save only 2/100ths of 1 percent of Verona’s spending on education, and do nothing about $6 billion to $7 billion being wasted across the state–and funded by Verona taxpayers.

The governor’s proposal, ostensibly aimed at reducing out of classroom costs, also, in Quattrocchi’s view, does nothing to acknowledge the mandates that the state imposes on districts like Verona and fails to fund. “We now get a total of $70,000 [from the state] for a total budget over $28 million,” Quattrocchi says. “Since that budget is fully paid for by the Verona taxpayers, the Verona community should have the authority to determine how this money is used. Local elections, local control for the management of local tax dollars. People should be outraged at how the state is taking our money.”