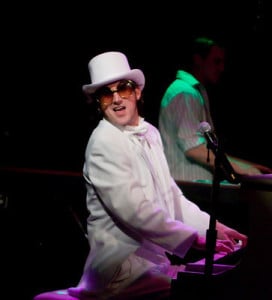 Watch Bobby Lynch walk down the street and you still see in his lanky gait the basketball player he was at VHS a decade ago. But when the houselights go down and the stage lights come up, a whole different Bobby Lynch comes out: An entertainer whose skills on the piano caught the attention of Verona’s music community when Lynch was still in elementary school.

This Wednesday, July 7, you’ll get to see what they saw in Bobby Lynch when he kicks off Verona’s summer concert series in the town square with his Elton John tribute band, Bobby & The Jets. Can’t make it? Not convinced? Then watch the video below and play close attention to the way Lynch attacks the piano. He’s got the keyboard chops the rest of us have only in our dreams. And an in-born sense of entrepreneurship that has helped him understand what the next music trend is before it happens.

Tom Valente saw that streak early. Valente, who just retired from a long career in Verona’s public school, played softball with Lynch’s dad and took Bobby on as his bat boy when Bobby was just seven years old. “I was the envy of every coach in Verona,” Valente says, “because every bat, every helmet, every bag was lined up in an organized fashion. Everybody said to me, ‘Where did you get this kid’?”

The kid went on to take piano lessons from the keyboard player in the band that was the sideline to Valente’s career as an educator. The kid got good enough to play with Valente’s band in his own right and to entertain visitors to Verona Park’s boathouse as part of a trio when he was just 13. And when Valente’s keyboard player got ill and needed to take a break from the  band, the kid–now 17– stepped in. “The kid was just unbelievable,” Valente says. And respectful enough of his music mentors (mostly) that Valente’s keyboard player, VHS alumni Doug Kistner, will also be on stage Wednesday night with Bobby & The Jets and Valente will be performing with Lynch later this year on the Atlantic City casino circuit as part of the Bobby Lynch Orchestra.

Lynch gives much credit for his success as a musician to his Verona music teachers, Lou Budz and Pat Curcio, who, he says, “opened the world of jazz to me.” “I was into sports,” Lynch adds, “but they made music interesting to me and they showed me how to make a living doing it.”

But Lynch admits he might owe a few apologies to John Lyon, better known as the frontman of New Jersey music legend Southside Johnny and the Asbury Jukes. Lynch landed the chance to be keyboard player for the band a few years back, even though, he admits, “I had no idea who he was and no right to be there.” Lynch hot-dogged his way through his first performance and, after Lyon unplugged his keyboard, he compounded the error by singing “We’re Having A Party”, Southside Johnny’s signature song. “I got humbled quick”, Lynch concedes sheepishly, and forged an alliance that opened a lot of doors down the Jersey Shore, where Lynch continues to play many gigs.

Lynch has always played a lot of Elton John, as you might expect of someone who grew up listening to two great keyboard players, Elton John and Billy Joel. But it wasn’t until this past January that he made an entire act of the British performer, after studying his concert videos on YouTube. It’s already proving to be a smart move: With tribute bands in high demand at area casinos, Lynch said last week that he will be performing 121 shows in 101 days this summer.

You can catch one of them this Wednesday night. We suggest you do so.

(Photo right and home page photo by Michelle Valentino at Party Like A Rawk Star.)