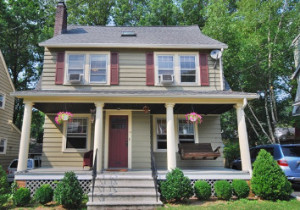 You can dally in the front porch swing on 16 Newman Avenue. You can lounge in the hammock slung between two of the big trees in the backyard. You can slowly sip a cooling drink on the back deck. But the one thing that you cannot do is delay seeing this house if you are interested, because a house like this at a price like this–$449,000– is not going to stay on the market for long.

First some basics. If you have elementary school kids, you’ll want to know that this house is just a five-minute walk from Laning Avenue School. If your kids are in grades five through eight, they’ll have a 15-minute walk from the house to H.B. Whitehorne Middle School. If your kids are in high school, this house has a long driveway that could probably hold four cars and it ends at a detached two-car garage. Or, if you move the cars out, there’s plenty of room for a basketball game that won’t spill into the street. 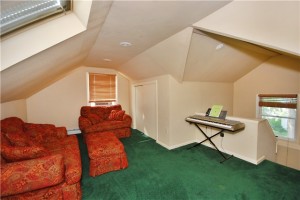 That’s the outside. Inside, you have four bedrooms, one of which is tucked up under the eaves on the third floor. There’s a full bath up there, too. Some homeowners have styled this kind of space as a master suite. The room in this house isn’t as buttoned-down as most (the current owners are using it as a family music room), but if your style is relaxed, it could work as a master for you. Or envision it as the teenager bed/bath floor, since they tend to spend longer in both than anybody else in the house.

Working our way back down, the second floor has three bedrooms and the house’s other full bath. The closet in the master bedroom isn’t a walk-in, but you’ll have no problem storing a season of clothes in it. All of the rooms, upstairs and down, are mostly free of wall-to-wall carpet, so the beauty of the home’s well-maintained hardwood floors shines through. 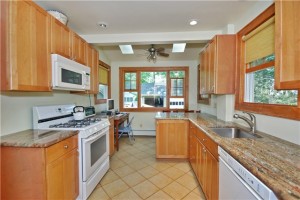 The first floor is the living room (with fireplace), a dining room (with room for a piano) and a renovated, eat-in kitchen, which has a view of the backyard (important mom feature!) and access to the back deck. You’ve probably guessed by now that there is no bathroom on this level, and, as far as I can see, no way to easily add one. First-floor bathrooms were uncommon in the era in which this house was built, and many homes of this vintage in Verona lack one. You might, however, be able to expand the bathroom space in the finished basement (that’s F-I-N-I-S-H-E-D), which now has just a toilet. I’m also not put off by the lack of central air, since the cross-ventilation is good and many of the rooms have ceiling fans. The paint colors on the wall may be unusual for a colonial, but they add a lot of life to the rooms. And if they’re not your taste, paint is one of the easiest house fixes around.

What will I quibble about? (Every House Snooping column has to have a quibble or two.) Here it is: The front landscaping. The current owners replaced some overgrown shrubs that were in poor shape, but the new bushes still need to grow into their space. I’d fill in with lots of bulbs, and I’d probably add a Dogwood or Eastern Redbud tree to the yard because this stretch of Newman has lost the giant oaks that dominate elsewhere on the street. Several of the front yards on neighboring houses have under-story trees, and they make a lovely addition.

The listing agent is Lucia Gagnon, a Verona resident who works out of Prudential Damiano Realty. You can find her contact information and more details on the house here.