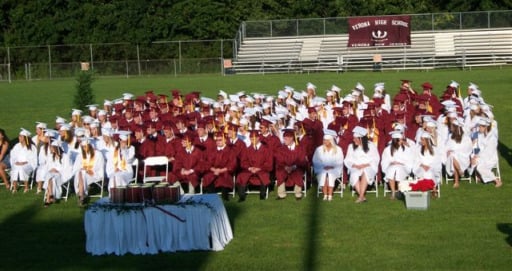 For four years, they’d been good. In fact, in the words of the administration at last night’s graduation ceremony, they’d been an exemplary, extraordinary class. “One of the greatest classes ever to walk to halls of Verona High,” according to Principal Glenn Cesa. Citing their cooperative, altruistic nature exemplified by the voluntary senior service group “Gentlemen 10,” he said: ” I will miss the humble character that has defined you as a class.”

The weather was a cause for jubilation too: Despite an early afternoon downpour and reports calling for more violent afternoon thunderstorms, the graduation was held on Thomas J. Sellitto Field, just as the clouds and humidity seemed to magically disappear.

So you might say the Class of 2010 had earned a celebration. And celebrate they did. Numerous beach balls and even a blue blow up shark spontaneously erupted during speeches by Co-Valedictorians Erin Percevault and Nicole Robertson, Senior Class President Jenna Barone, Student Council President Dan Egan, Assistant Principal David Galbierczyk, Superintendent Charles Charles Sampson and John Quattrocchi of the Board of Education.
And at the end of the ceremony, after Barone led the way in the traditional tassel turn and hat toss, the real fun began. Students chanted at the band to “Play the song!’ and the students musicians erupted into a rendition of “The Lion Sleeps Tonight” and other lively tunes that had the mob of exuberant graduates forming a dance circle and mosh pit. 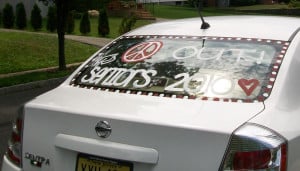 The celebration for the graduates continued into the wee hours at Spa 23 for Project Graduation. The group enjoyed swimming, games, a hypnotist, a professional photographer and other activities. Enjoy the rest of your celebrations graduates; they are well-deserved. We too will miss your humble character–and your joyful spirit.

Previous articleForest Fountain Dedicated
Next articleYou Are The News