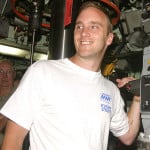 Jay Mohr has written a book and it’s the last thing you might expect from the sharp-edged comic: parenting.

“No Wonder My Parents Drank: Tales From A Stand-Up Dad” was published by Simon & Schuster on May 11, and it made the Los Angeles Times best-seller list on June 10. Ignore the first part of the title, which might have been some publicist’s idea of an attention grabber. Mohr, who grew up in Verona before embarking on a comedy career that has taken him to “Saturday Night Live”, “Jerry Maguire” and the recently canceled “Gary Unmarried”, has told followers of his Twitter feed that he has been sober since 1996.

Focus instead on the subhead, because the book tells, in vintage Mohr fashion, the story of his life as a first-time father (his son Jackson was born two-and-a-half months premature in September 2002). Take this excerpt from the the chapter “Preparing For Baby”:

“If I ever decide to open a business later on in life, I will open a store that sells only baby furniture and retire to the Caribbean after two years with billions. Cribs, daybeds, and baby-changing stations are more expensive and more valuable to a new parent than all the diamonds in South Africa.

Shortly before Jackie was born, I went shopping for all the furnishings of my soon-to-be-son’s nursery. Strict adherents to many religions will not buy baby products or open any baby shower gifts until after the child is born. They consider this an act of arrogance against God’s impending gift. But I decided to go shopping because I didn’t want my kid to be sleeping on the dining room table.

I went to a classy baby furniture boutique on Ventura Boulevard in Sherman Oaks. I shopped for less than one hour. I left with three pieces of furniture and all of their accessories and was quickly and pleasantly charged . . . seven thousand dollars.”

While many of us will see ourselves in the tales that Mohr recounts (well, maybe not the final tab above), I liked best his reflections on his own father, and what he understands now about being a parent that he did not understand as a child. So on this Father’s Day, take a minute to listen to the audio excerpt of “No Wonder My Parents Drank” located in the middle of this page.