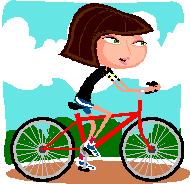 Brookdale Avenue School students will be riding their bikes and scooters to school on Monday, June 21–and it’s all for a good cause.

The kids will getting to school under their own power to raise money for Brains on Bikes. The charity was created by New Jersey native Anne Feeley, who was diagnosed with a rare form of brain cancer in 2006. Though her initial prognosis was grim, Feeley survived and is now riding a bicycle across the United States to raise awareness and funds for brain cancer research. She started in San Francisco on April 9 and will end her trip in Washington, D.C. on on July 15.