A Haircut For Love 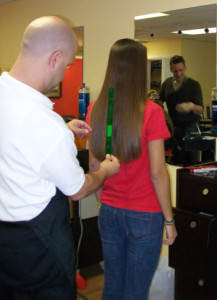 Allison Zabady said goodbye to a lot of her long hair on Wednesday, and when it grows back she will likely do it again.

Yesterday at the Anthony Robert Salon in Verona, Zabady had her third haircut for Locks of Love, a non-profit that creates hairpieces for children that have lost their hair to disease. Zabady, a Verona resident who just graduated from Mount Saint Dominic Academy, began donating her hair to the charity when she was in the fifth grade. “My mom’s best friend, Minette McKenna, died of breast cancer and I didn’t know what else to do,” Zabady says.

She donated her hair to Locks of Love again in her freshman year at the Mount, after her grandfather was diagnosed with pancreatic cancer. Now, contemplating the start of her college career at Rutgers University in the fall, she decided it was time again. “I just grow it to give it to someone else,” Zabady says.

When she walked in, Anthony Lombardi, the owner of Anthony Robert Salon, got out the green ruler he has used many times during the 10 years he has been cutting hair for Lock of Love donors: The pony tail being cut must measure at least 10 inches and not contain hair that has been chemically lightened or highlighted.

Zabady’s hair more than passed the test, so it was time to bid it farewell, in two separate pony tails that will be the start of a new wig (it takes 8 pony tails to make one hairpiece). In “Jerseylicious”, the reality TV show Lombardi stars in, the Locks of Love benefit turned into a skirmish between two of his female co-stars. But in the hush of Lombardi’s own salon, Zabady’s haircut became another quiet tribute to the cancer patients she has known.