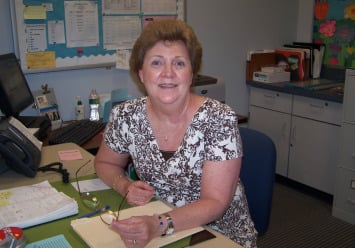 Ironically, DiStefano says that she’s “really not a phone person.” When not at work, she asks her husband, Verona Police Captain Fred DiStefano, to get the phone. “I wonder if that will change when I’m not getting a hundred calls a day,” she says with a laugh. “I hope somebody calls me!”

One thing is certain: DiStefano will not be lonely. Her husband is also retiring after 39 years with the VPD, and the two are looking forward to seeing more of their three children: Jeremy, a chef in Boston; Melissa, a nurse at Mountainside Hospital who lives in Verona, and Matthew, a golf pro at Rock Spring Golf Club in West Orange. “I’ve been the only one who keeps normal Monday to Friday hours,” she says. “Now I can be available when the kids visit.” After she and her husband take a cruise to Alaska this summer, that is.

DiStefano has seen a lot of changes in her more than two decades at Brookdale: When she started there were just 87 children in the school, including special education classes and the fifth grade. Now, the school numbers 140 in grades K through 4. Years ago, the school had a principal and a nurse only two days a week; now both are full-time. “And it’s great to have a real media center and cafeteria,” she says, following a renovation three years ago.

Technology, though, has brought the biggest changes to her job. Where before the school doors were left unlocked all the time, she now monitors a camera and buzzes visitors in. And she spends a lot of time on e-mail. While she says that most of the changes wrought by technology have been good, she misses the personal interaction. “I don’t pick up the phone to call the board office anymore,” she says. “It’s all e-mail. But some  questions or problems can be solved so quickly with a phone call instead of e-mails back and forth and sometimes mis-communication. ”

She will miss the “family atmosphere” at Brookdale, along with Principal Rich Rampolla, who taught all three of her children when he taught at F.N. Brown and H.B. Whitehorne and with whom she shares a birthday.

“I’ve always enjoyed meeting the new families and the new kids and watching them grow,” she says. “Life goes by and they grow so quickly;  it feels like yesterday that I started here.”