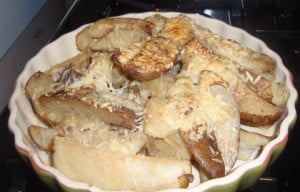 As a nice Irish girl, I’m naturally attracted to potatoes. I’d even say I haven’t met a potato I didn’t like. So when I came across this recipe claiming to make the potatoes the star of the meal- I just had to try it. Let me say, I was not disappointed. The flavor is great and the cheese melted on top is a winner!

What’s Next
1. Heat the oil in large skillet over medium-high heat.
2. Brown the cut sides of the potato wedges in the hot oil in batches, about 2 minutes per side. Do not crowd the pan. Transfer the potatoes to a 5-to-6 quart slow cooker after browning.
3. Add the onion to the oil in the skillet and cook over medium heat until tender, about 3 minutes.
4. Add the garlic, rosemary, salt, pepper, and flour, and stir until evenly coated.
5. Add the broth and simmer until it thickens slightly; pour over the potatoes.
6. Cover with a folded kitchen towel, and top with the lid.
7. Cook for 3-4 hours on high, or 6-8 hours on low, until the potatoes are tender.
8. Remove the towel, scatter the Parmesan over the top, cover, and cook for 3 minutes, or until the cheese melts.