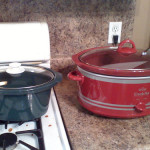 I have a friend who has two slow cookers and isn’t shy about making TWO pots of BBQ Pulled Pork at once: It’s that good!

I love a pulled pork sandwich and when I realized how easy it is to make in a slow cooker, I actually understood why one would want to make two batches at once. Until I found this recipe (originally printed in one of my Cooking Light cookbooks) my only visual reference of how to make “barbeque” was from the movie Fried Green Tomatoes. So, without my outdoor pit and days of cooking, I found a way to make delicious BBQ Pulled Pork.

Want to know more about our Crock It! series, read all about it here.