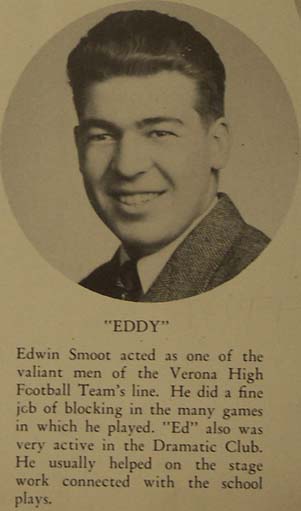 Since we published the photo of the 1940 Verona High School football team, we’ve gotten a few tips about the players. But none was more stirring than the e-mail we got from Verona Town Council member Jay Sniatkowski.

Sniatkowski had just participated in Verona’s Memorial Day ceremony and realized that the name Smoot–the player second from the right in the front row–rang a bell. He went to Verona Heroes, a Web page created by Verona genealogist Rob Caruso, and confirmed what he remembered.

Edwin C. Smoot Jr., like many other VHS students of his day during World War II, joined the military upon graduation. He became an aerial engineer in the Army Transport Command and logged 900 hours in the air between India and China. Private First Class Edwin C. Smoot Jr. went missing on September 16, 1944 and was later declared dead. The Verona Heroes page about his military service is here.