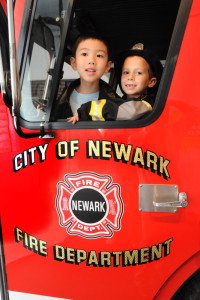 If you have kids who melt at the sight of a fire truck, you need to go down to the Newark Museum this Sunday, June 6 for the 43rd Annual Fireman’s Muster.

The Muster is a combination fire truck parade, food fair and fire safety event, put on by the Newark Fire Department Historical Association and the Newark Museum, that takes place on the museum grounds and across the street in Washington Park.

While the kids will glom on the fire engines, which are being brought in by more than 22 regional fire departments, the grownups who accompany them may be more interested to learn that some 80 firehouse chefs will be competing in a cook-off.

The event runs from 10 a.m. to 4 p.m., with a variety of mostly free activities scheduled throughout the day. The parade, which will be led by the Newark Firefighters Pipe and Drum Band, starts at 12:30 p.m. from in front of the Museum on Washington Street. The parade route follows a triangular course down Washington to Broad; across Broad to New Street; up New back to Washington. The fire engines, rescue squads and other vehicles participating in it will stay on display around the park until 3:30 p.m.

Previous article
Do You Know This Team?
Next article
Elderly Man Drives Car Into Brook