Though he has spent 28 years on the Verona Fire Department, Charlie Magatti has probably never been called to your house. Verona has very few serious fires every year. But, thanks to him, you have something in your medicine cabinet that extinguishes a far more pervasive problem: allergies. Charlie Magatti, the current chief of the Verona Fire Department, is the inventor of Claritin.

Yup, you read that right. West Orange is the birthplace of the lightbulb, Caldwell can lay claim to a president, but Verona can plant a flag on one of the world’s biggest drugs. Sort of. The actual building where Magatti did his work was down in Bloomfield, where the Home Depot now stands. But Magatti was living in Verona when he made the discovery that makes spring and fall livable for allergy sufferers. He had moved to New Jersey from Brooklyn, and still has the intonation to prove it.

He also has the distinction of doing something that few people in the pharmaceutical business ever do: Create a drug that works in the lab and in the marketplace. “I have worked in this industry since 1989 and I have never had anything that has gone into a pharmacy,” says Derek Lowe, a drug discovery chemist who worked down the hall from Magatti at Schering-Plough and now writes the blog In The Pipeline. “Getting a drug all the way through to the market is a rare event. And rarer still is that it succeeds in the market.” 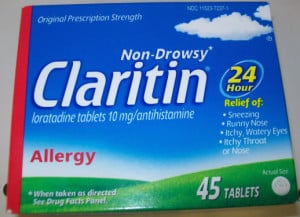 Claritin, the first truly non-sedating antihistamine, certainly has. According to Forbes, prescription sales totaled $425 million in 2008; sales of the over-the-counter version added $405 million more. But don’t run for your calculator to tally up how much Magatti has made from all this; the answer is zero. “It was my job to invent things,” he says with a shrug. (Magatti, who technically shares the patent for Claritin with his then boss, did get a $3,000 award from the president of Schering-Plough when the drug was approved by the U.S. Food & Drug Administration.)

The past is the past, and Magatti is more focused on changing the future: Getting more American kids interested in science. Armed with a B.S. from the University of Dayton, an M.S. from Boston University and a Ph.D from Rutgers, Magatti has been teaching at Seton Hall Prep for the past 10 years: chemistry, AP chemistry and honors organic chemistry. “We’re one of the only high schools in the state teaching that has organic chem,” he notes. “It gives the kids who want to do science in college a great head start.”

But expanding America’s scientific base is almost as difficult as inventing a drug. Science is hard, and the M.B.A. crowd earns more. Many high schools shy away from science labs because they are expensive to run and a potential liability. No matter. Magatti draws on his 26 years in the drug industry to drive lessons home for his students. “I say, I used this reaction that we are learning today when I made Claritin.”

Lowe thinks that Magatti’s personality also helps. “Charlie was fun to work with because he had been around,” he says. “He had a lot of experience, and had seen a lot of stuff happen. He was hard to faze. He didn’t get overly enthusiastic about a discovery and he didn’t get discouraged if it didn’t work. It’s helpful to have a good sense of humor in this line of work.”