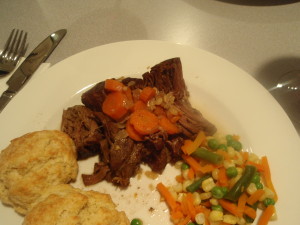 This is one of my favorite recipes! It was originally printed in the March & April 2002 Cooks Illustrated magazine, and then reappeared in the Best Slow and Easy Recipes from America’s Test Kitchen. While there are pot roast recipes in the book that are made specifically for the slow cooker, this is my favorite recipe and I wanted to convert it for this series. It’s worth sharing and I wanted to share! What is written below is my converted version of the original recipe. Interested in the original version? Let me know and I’ll post it to the site. I made buttermilk biscuits to go with the pot roast and it was truly a comfort food meal.

Notes from my experience
I did not split and tie my roast. I’ve made this recipe several times and have never done that.

I also don’t slice my meat across the grain. I prefer to pull it apart with two forks, the way you would with a shredded beef recipe.

It was a busy night, and I did not transfer the liquid to a pot at the end to make the sauce. We chose to drink the wine (and then some) rather than add it to the sauce.