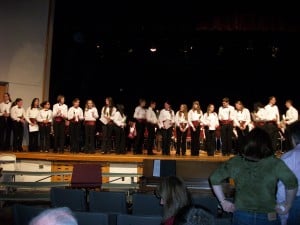 Last night’s spring concert at VHS had many highlights. There was the Vocal Jazz Ensemble, which gave us goosebumps singing their personal favorite, George and Ira Gerschwin’s “Embraceable You.” (video below) Four boys–Troy Locatell, Alex Eliasof, Sean McGinley and Michael Hardenberg–from that ensemble entertained with a playful version of “Sixteen Tons” and then the group wrapped it up with Journey’s anthem “Don’t Stop Believing.”

The concert choir featured some lovely classical melodies and then perked it up with “Up in the Morning Early,” which was arranged and conducted by William Arnold, a local musician who had filled in when choir director Amanda Hamilton was out on maternity leave a few years ago. Patrick O’Brien’s tin whistle accompaniment was a fitting touch.

The concert band is always rousing and last night was no exception. They opened with “Barnum and Bailey’s Favorite” and ended with “Tempered Steel.” Discordant pieces can be tricky to pull off, but they did with aplomb under director Erik Lynch’s superb and athletic direction. In between was “In A Gentle Rain,” featuring Julliard-trained Dan Egan on trumpet and senior Emma McFarland, the talented and hardworking pianist who has diligently and beautifully accompanied concert and chorus numbers for years.

Both Egan and McFarland are seniors and we will miss them and their beautiful gift of music and the many other talented seniors. As usual, Mr. Lynch got choked up saying his thanks and goodbyes at the end of the night. But there was also something new: The seniors walked out in pairs while Jazz Band director Max Morden serenaded them on his trumpet to the strains of “Lean on Me.” (pictured above) You can hear them too, on the videos from last night below and on MyVeronaNJ’s YouTube site.

Best of luck to you all next year and may music remain a light in your lives.