Caterer Is King Of The Castle

Frungillo Caterers may be one of the biggest and most successful event planning businesses in the state, but it’s still all about family.  Run by Verona-bred brothers Robert and Jerry Frungillo, it operates out of five locations, including the Villa at Mountain Lakes;  Skylands Manor in Ringwood; Oakeside Mansion in Bloomfield, and The Mezzanine in Newark.  The company can handle up to 10 weddings at a time, and has hosted events for Pope John Paul II and Frank Sinatra. Frungillo Caterers was recently “event doctor” for a TLC reality drama series hosted by Kelly Ripa, “Masters of Reception”(see clip below), and is now in negotiations for a second season.

But no matter how big their company gets, the Frungillos haven’t lost sight of the fact that it all began in Verona in the family deli on Bloomfield Avenue, across the street from where the 7-11 now stands. In a 15-foot-wide storefront, Robert and Jerry’s parents Al and Ann Frungillo gave out free subs to any kid who hit a home run at Everett Field.  “We have deep Verona roots,” says Robert Frungillo, who still lives in town and whose kids attended Forest Avenue school and H.B. Whitehorne just as he did. The family will soon celebrate the coming of age of the next generation of the family: This spring, Skylands Manor is hosting its first prom, that of Montclair Kimberley Academy‘s Upper School, where Rob’s son is a senior.

Skylands Manor is the latest jewel in the family business’ crown and has been a “godsend,” says Robert. Eleven years ago, the brothers were approached by state officials about taking over the dilapidated historic site, a 54-room granite castle designed by architect John Russell Pope as a country estate for Francis Lynde Stetson, J.P. Morgan’s personal attorney, in the 1920s. “It was 100 years old and and falling apart,” Robert says. But the location was unbeatable: The castle is nestled in the middle of the 100-acre New Jersey Botanical Garden, within the 1,000 wooded acres of Ringwood State Park.  It took seven years and a lot of hard work getting plumbing and electricity updated in the castle’s 12-inch-thick walls, while working around the red tape governing historical sites. But ten years ago, the wedding and conference center facilities were finally finished. 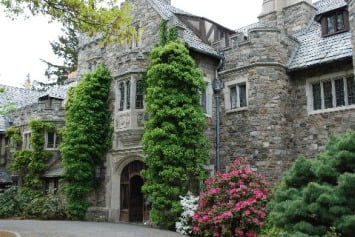 Then, two years ago, the second phase of renovating the castle began: converting the upstairs into a bed and breakfast. The brothers saw this as a great business opportunity because of the volume of weddings at Skylands Manor and the dearth of such accommodations in the area. But it was another labor of love.

“The ceilings were collapsing, the walls were crumbling, the floors were down to the studs and none of the plumbing worked,” says Robert Frungillo. “All we had to work with were the concrete walls.” To create an authentic, romantic feel and give each of the 24 upstairs rooms a unique and historically accurate look, the Frungillos imported the walls and ceilings from historic houses in different parts of Europe and re-fabricated them to fit the castle’s bedrooms.

“We wanted guests to feel like they are in another country, while they are in their own backyard, New Jersey,” he says. It has been an excellent investment–in addition to being popular with wedding couples and their families, the rooms have become a destination for New York City couples who can arrive at their weekend getaway in a little over a half hour via the George Washington Bridge. The rooms are also popular with high-end companies such as Victoria’s Secret and Neiman Marcus, which use them for photo shoots.

Skyland Manor’s location in the midst of acres of magnificent gardens is another boon to the business. There are 14 private gardens and 5 separate water gardens in the botanical garden surrounding the castle, all maintained by the state–perfect for wedding portraits, of course, but for Robert they are also a welcome reprieve. “Before we took over I didn’t know there was a botanical garden in New Jersey,” he says. “Now I’ll go up  there for an overnight, just to walk around, it’s so beautiful.”