Eight weeks ago, Anthony Lombardi was a nice guy with a nice hair salon in a nice New Jersey suburb. Now, he’s a star of a hot reality TV show with 867 fans on Facebook and 487 e-mails from yesterday in his inbox. And a contract for a second season.

On Thursday, the Style Network told the world that it will give “Jerseylicious“, the show Lombardi appears in,  another 10 episodes after the show won the cable channel’s best-ever ratings for a new show among women age 18 to 49. Since its premiere on March 21, “Jerseylicious” has garnered more than 9.4 million viewers.

The success has left Lombardi, who is the owner of the Anthony Robert Salon in Verona, a bit dazed. “The other day I was at Calandra’s and the counter girls wanted to take a picture with me,” he says, shaking his head in amusement. [Full disclosure: Lombardi has been my stylist for the last 6 years and deserves all the credit on the days my hair looks good and none of the blame on the others.] 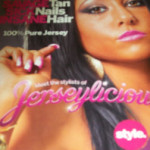 In case you haven’t been watching “Jerseylicious”, Lombardi is the calm eye at the center of a hurricane of female hormones in a salon in central Jersey. As the women hiss and claw, Lombardi provides the color commentary–and comic relief. The mix of chaos and comedy has made the show’s cast in high demand on shows like “Tyra Banks” and “Extra!”, and even super-serious “Nightline”, which recently did a feature “Why America Loves Jersey-Flavored TV” that had Lombardi styling the hair of reporter David Wright. And last week, Lombardi and his fellow cast members made over the anchors of PIX-11 Morning News, Jill Nicolini and Linda Church.”That was great,” Lombardi says, “I watch that show every day.”

When he and stylist Jeff Greenfield are not welcoming new customers to the Anthony Robert Salon, that is. “The first four weeks the show was on, Jeff and I sat around and said, ‘Nothing’s happening’,” Lombardi recalls. “Then all the people started calling.” He doesn’t know if those changes will be factored into the new season of “Jerseylicious” because he hasn’t see the storyline yet. But he believes that the second season will start filming soon, to build on the momentum of the first eight shows.

And like Verona’s Ariane Duarte, who competed on Bravo’s “Top Chef”, Lombardi is finding himself in demand at a variety of events outside his business. On Thursday, he and the “Jerseylicious” cast were the headliners at Restaurants for a Cure, a fundraiser to end childhood hunger at the Wilshire Grand Hotel in West Orange, where he found himself talking to Duarte. “And eating her great crab cakes,” he notes quickly. “I could definitely have more of those.”

The finale of “Jerseylicious” is this Sunday, May 9 at 10 p.m. on the Style Network, which is on channel 160 on Verizon and channel 50 on Comcast. If you missed any episodes, you can watch them on Hulu.