Since the Verona-Cedar Grove baseball game at Yogi Berra Stadium is more of a town-wide event than just a game, I thought I would try something a little different.  Here is a minute-by-minute recap of Wednesday night’s game, the crowd, the atmosphere, and my own stream of consciousness.  Hope it’s entertaining.

6:45 p.m.: I arrive at Yogi Berra Stadium.  Eight Hills is catering the event and Hillbilly Baseball T-Shirts are being sold.  The weather is absolutely perfect.

6:50: Verona’s starting lineup is announced and they run out to their positions. 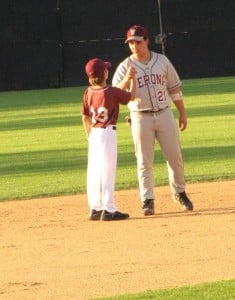 6:52: After the varsity starters are on the field, Verona’s Little League team is announced and they run out to their positions.  Each Verona High School Player gives the Little Leaguer of the same position a high-five.  It is a long run out to the outfield for the little guys but they manage.  You can see on the kids’ faces they are thrilled to be with the varsity players on the big field.

6:54:  The Cedar Grove starters and Little Leaguers are announced and run out to their positions.  In a show of good sportsmanship, handshakes and pounds are exchanged between the two rivals.  Thankfully, Cedar Grove is wearing black jerseys tonight and not the hideous white ones they wore last week. 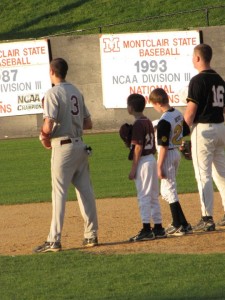 6:59: A quick organ version of the National Anthem is played.  If you were betting the over/under on the time of the song like so many do during the Super Bowl, the under would have won.

7:02: Cedar Grove legend Jim Garrick throws out the ceremonial first pitch.  He throws from the rubber and doesn’t bounce the ball.   Every baseball fan knows these are the two most important parts of throwing out the first pitch.  Great job, Jim.

7:04: Cedar Grove takes the field as the home team.  Lefty Russ Pagano takes the mound.  Matt Rosenfeld is starting for Verona so it looks like we will have a rematch of last week’s pitcher’s duel.

7:06: Verona Little Leaguers are watching the game from on top of Verona’s dugout.  It seems like a dangerous spot and I wonder how long until they are told to move. 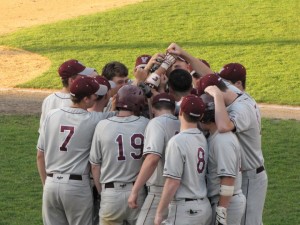 7:07: The game gets underway.  Brian Hill gets hit by a pitch.  Anthony Oranges lines an RBI triple into the right centerfield gap.  Hill scores.  It’s 1-0 Verona before the crowd is even in their seats.  The Verona dugout is jacked up.

7:11: Mike Congero singles in between the third baseman and the shortstop scoring Oranges.   2-0 Verona.

7:14: The top of the 1st inning ends.  Like at all good high school baseball games, an impromptu game of Running Bases breaks out among Cedar Grove’s Little Leaguers in the field behind the right field wall.

7:17:  It took CG 5 innings to get a hit off of Rosenfeld in the last game.  Tonight the 2nd batter of the game gets a hit; a double by AJ Gammaro.

7:20:  Rosey works out of trouble and strands a man at second base.  End of 1st inning.

7:27:  “Put Me In Coach” by John Fogerty is played while the teams switch sides.  I think this song and “Glory Days” by Springsteen are required to be played at every baseball game ever.  It is one of those unwritten rules. 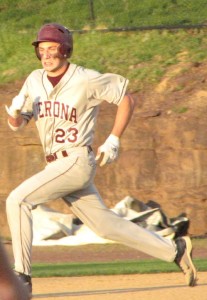 7:29:  Mike Congero makes an unbelievable diving catch in right centerfield.  This was not one of those plays where he got a bad jump and had to dive for it.  He got a great jump, went a long way and made a full extension catch.  It was sick.  This will be a tough one to top for play of the game.  He flips the ball to right fielder Alex Eliasof to throw into the infield.  That is swagger.

7:31: After Cedar Grove gets a hit, a stolen base, and advances on an overthrow, Rosenfeld fields a groundball back to himself.  He floats the ball over to Anthony Pena at first base and the crowd holds its breath.  He makes the play and again works out of trouble.   Still 2-0 Verona after two innings.

7:33: Eliasof hits a hard comebacker that is snagged by Pagano for an out.  After a walk, Oranges hits a line drive right at the shortstop who flips to first for a double play.  Bad luck inning for Verona.

7:40: In the top of the 3rd inning Brian Hill almost makes a great play at shortstop and appears to tweak his hamstring.  He gets stretched out by Jay the trainer.  Not a great day for Hill’s body so far with this and getting pegged earlier.  He’s tough and stays in the game.

7:42: After a bunt single, Cedar Grove gets on the score board with an RBI single by Steve Raum.  This is the first run Rosey has given up in 10 innings against CG.

7:44: Brian DelGuercio for Cedar Grove flies out to right field.  The runner on 2nd base tags and goes to third and the relay throw gets away allowing him to score.  2-2 game.

7:48: A sacrifice fly scores another run on a very close play at the plate. Verona appeals the tag up and the runner is called safe.    3-2 Cedar Grove.

7:51: End of the 3rd inning.  A very sloppy inning for the Hillbillies.

7:53 Congero leads off with a walk.  Pena singles up the middle.

7:55: With runners on first and second, Anthony Seymour hits an RBI single up the middle.  Verona answers quickly.  3-3 game. 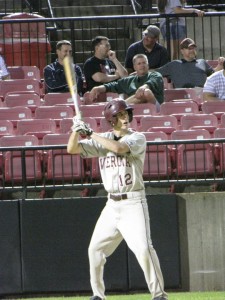 7:56:  With runners still on first and second, Tim Kiernan lays down a sacrifice bunt moving the runners forward.  What more can you ask for from a sophomore second basemen?  Great fundamentals.

7:59:  Joe Fitzmaurice walks to load the bases but unfortunately Verona fails to score.  3-3 middle of 4th.

8:01: In between innings I have a horrific flashback of playing here at Yogi Berra Stadium.  I was playing for a summer league team and it was 100 degrees out that day.   I was 0-9 on the double header.   It was a very, very long day.  Probably the worst day of baseball in my life outside of Game 7 of the 2004 ALCS.  I do my best to shake off these traumatizing memories and continue watching the game.

8:06: In the bottom of the 4th Cedar Grove gets a leadoff walk and bunts him over to 2nd base.  With a man on 2nd and 1 out, Rosenfeld hits a batter to make it 1st and 2nd.  A groundball up the middle and an errant throw scores 2 runs.  The bad throw sends the batter all the way to 3rd base.

8:10:  Suicide Squeeze!  It’s the most exciting play in baseball and here it works.  6-3 Cedar Grove after 4 innings.

8:15:  Brandon Valez is the new pitcher for Cedar Grove.  He throws his first warm up pitch to the backstop.  Classic psych-out tactic.  The Verona players might be wondering if he even knows where the ball is going.  Don’t dig in too deep in the batter’s box.

8:16:  YMCA is the song played in between innings.  The crowd is surprisingly uninterested.  I did not see one man, woman, or child doing the dance.  The Yankee Stadium grounds crew would be ashamed.

8:18: Brian Hill leads off the 5th inning by working a walk. 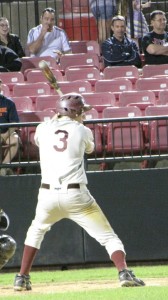 8:21: Mike Congero rips an RBI triple that goes to the right field wall.  Anthony Pena promptly hits a sacrifice fly, sending Congero home.  Verona cuts the lead to 1 and it’s now 6-5 in the middle of the 5th.

8:30: As the 5th inning gets underway, a pitch in the dirt bounces up and appears to hit catcher Anthony Oranges in the throat.  It clearly hurts him but I have seen him survive much bigger hits on the field this fall.  He’s a football player, he shakes it off.

8:34:  After a walk, a stolen base, and a groundball up the middle, Cedar Grove scores another run.  7-5 Cedar Grove and Verona brings Alex Sniatkowski out of the bullpen.

8:47: Verona goes quietly in the top half of the 6th inning.

8:48:  It is very fun to watch Sniatkowski’s sloooooow curveball buckle opposing batters from behind home plate.  The crowd “oohs and ahhhs” every time he throws it.  He drops in the curve and strikes out a batter  looking.

8:57: The Verona Little Leaguers (who  amazingly are still being allowed to sit on top of Verona’s dugout)  make a mad dash after a foul ball as if it were Mark McGwire’s 62nd homer.  After one of them gets the ball, a “Throw it back!” chant breaks out.  He doesn’t throw it back.

9:06: Anthony Oranges hits a very long fly ball out to right field.  It might  have been out at Yankee Stadium.  He was on the ball all day and only had 1 hit to show for it. 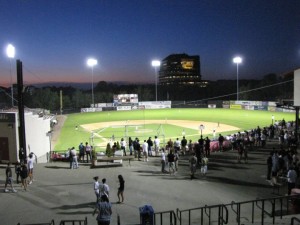 9:12: Verona cannot get a rally together and the game ends with a final of 9-5.  Cedar Grove is presented with a trophy and the team takes a picture with it.   It was a very fun night and despite all the runs, the game ended fairly early.  We might even have enough time to get home and see who is voted off American Idol.