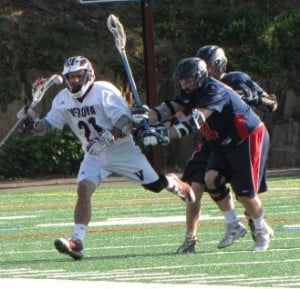 Verona defeated Governor Livingston 6-3 yesterday on Centennial Field in a thrilling back and forth contest that was as unpredictable as the weather.

The game was tied deep into the 3rd quarter before Greg Schiffenhaus bounced a goal in from out in front of the net to put Verona ahead 3-2.   They would take that lead into the 4th quarter but Governor Livingston would quickly answer, knotting the score back up at 3 with 11:09 remaining.

After a few switching possessions, it was Schiff again putting Verona ahead by knocking down another goal at the 8:08 mark making the score 4-3.  From there, Verona would never look back.

Coach Marc Brien was thrilled with Verona’s effort on the defensive side of the ball.  “In our last 3 games we allowed 1 goal against East Side, 4 goals (including overtime) against Millburn and 3 goals today against Governor Livingston.  Our goaltending and our defense has been outstanding.  In fact, we have only allowed double-digit goals twice this season and both times we didn’t have our starting goalie.  I believe we have clearly proven to ourselves that we can play defensively against anyone.” 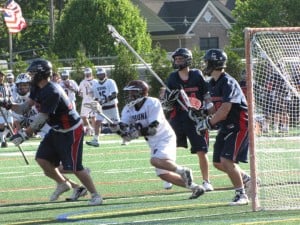 Coach Brien went on to say, “I hope that the effort we put out today will spark our offensive players to get to the next level, which I have seen at times this season, and finish off the remainder of the year by matching our defensive efforts on the offensive end.”

The Boys look to build off this victory in their next game against Edison, at home on Thursday, May 6.

Verona and Caldwell. A pair deeply intertwined in history. A rivalry fought every year for the title of...