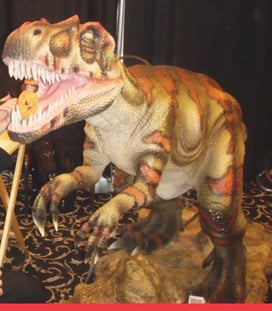 There haven’t been real dinosaurs stomping through New Jersey for some time now, but it will feel as if they’re back this Sunday at the Newark Museum‘s Third Annual Dinosaur Day.

That’s because this year’s Dinosaur Day will feature two life-sized, animatronic Tyrannosaurus rex dinosaurs. The robotic dinosaurs, an adult and a juvenile similar to the ones used in the movie Jurassic Park, replicate the exact movements and sounds of a T. rex.

The dino robots aren’t the only reason to go. The museum is promising dozens of exhibits including dinosaur fossil replicas; demonstrations in the geo-sciences; and a fossil and mineral dig by Dinosaurs Rock®, a New York-based education and entertainment company.

“Dinosaur Day has been planned with a host of activities for everyone in the family,” says Ismael Calderon, the Newark Museum’s director of science. “Approximately three dozen activities, games and fun-filled learning opportunities are built into the day for adults, elementary and high school students.”

Dinosaur Day is a special festival, which means it will be one day and one day only, running from 10 a.m. to 4:30 p.m.  Dinosaur Day is free with suggested museum admission, which is $10 for adults, $6 for seniors, children and students with valid ID. Oh and every kid will get a souvenir fossil to take home.

The festival is an adjunct to the museum’s ongoing Dynamic Earth exhibit, so Sunday’s visitors can also participate in scientific experiments and demonstrations including the creation of a mini-tsunami and racing a robotic rover over a Martian obstacle course. You can also get a tour of the Dynamic Earth exhibit.

One other tour possibility: A sneak preview of the newly renovated Alice & Leonard Dreyfuss Planetarium, which re-opens May 22.