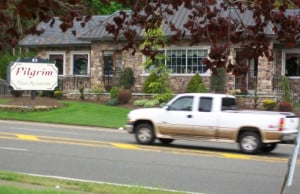 A lunch-time kitchen fire briefly shut the Pilgrim Diner in Cedar Grove on Thursday. But the diner was again operating to a packed parking lot by the weekend.

Baristanet reported a bank robbery at the Wachovia branch on Bloomfield Avenue in Glen Ridge. The Glen Ridge Police Department isn’t saying how much money was taken, but its detective bureau, the Essex County Prosecutor’s Office, and FBI are investigating. Details on the crime, and the number to call if you have information are here.

College problems east and west of us. Montclair residents are angry at Montclair State University’s plans for a new sewer line to accomodate dorm construction, Baristanet says. MSU would pay the town $2.6 million plus construction costs for the line, which may be hard to ignore given Montclair’s budget woes.

Caldwell, meanwhile is floating a plan to close its budget gap by charging Caldwell College a fee for every student enrolled there. According to the Star Ledger, the tab would be $50 per full-time student and $25 per part-time student each semester. Towns elsewhere are trying to get state approval for similar taxes, contending the education institutions use municipal services.

A power play of a different sort: New Jersey’s Board of Public Utilities has cleared the way for PSE&G  to begin work on a controversial power line. Work on the line, which would run from the Highlands to Roseland, could begin this summer.

And finally, a bright spot in our sea of budget woes. Essex County pulled in $22.2 million last year from operating the county’s massive jail.  Essex County Executive Joseph DiVincenzo Jr. also reported this week that the county has cut $800,000 in overtime from the jail’s budget, which still carries a whopping $3.4 million in overtime charges.