Verona Baseball finally got back on track by defeating Newark Academy 5-3 on the road yesterday.  Junior Matt Rosenfeld went the distance on the mound, striking out three and only allowing three runs earning himself his first win of the season.  Anthony Pena jacked a two-run homer and Rosenfeld added a two-out RBI as Verona jumped out to a 4-0 lead by the third inning.  Verona was able to hold off a late NA rally to earn the victory.

The Tennis team continued their hot streak and added their 6th win of the season by defeating Columbia 3-2 yesterday. Paul Corrente won his first singles match 7-5, 6-2 and Noah Herman won his third singles match 6-3, 6-1. Brian Farrell and Mack Kirby added the third win for the Hillbillies by taking the second doubles match 5-7, 7-6 (7-2), 6-2.

Here’s how the other teams fared: 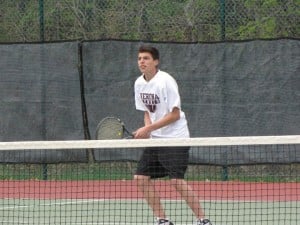