A Thriller Of A Jazz Night At VHS 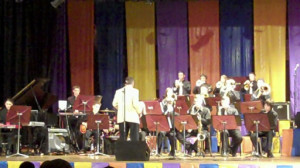 It was standing room only at Verona High School last night for performances by Verona Jazz & Beyond and the Vocal Jazz Ensemble that might have brought down the house if the auditorium hadn’t been recently remodeled.

From the opening number, “Lose The Shoes” to a closer so powerful it came with its own warning in the program, Verona’s high school musicians delivered. There were stellar solos by trumpeters Dan Egan and Danny Malloy, sax man Matt Tischio, guitarist Mike Basil, and drummers Wes Ostrander and Giancarlo Cordasco, as well as vocals by Michael Hardenberg, Megan Smillie, Alex Eliasof, Annie Palmer, Daisy Bourne, Andrea and Gabi Latimer, Isaac Rubin and Lauren Marden.

Many of the band members did double duty in the Vocal Jazz Ensemble–or VeeGees, as their t-shirts read. They were joined by Kim Castellanos, Claire Dulaney, Troy Locatell, Sean McGinley, Amanda Salierno, Kirsten Williams and Emma McFarland, who was also one of the band’s two keyboard performers. Their renditions of “This Little Light of Mine”, “Embraceable You” and “Walk A Mile” belong at Verona’s outdoor concert series this summer.

There also was perhaps a moment of vindication for every kid who has ever called his teacher a zombie, when some special performers turned up in the last number as just that. Hats off to special ed teachers Linda Barone, Elaine DeVita, Jahn Maka, Grace Minervo-Buneo, Joan Serpico and Gina Venezia; business educator Helene McLaughlin; VHS phys ed teacher Pat Schoenig; and Brookdale Avenue elementary school principal Richard Rampolla for some very good-natured fun (and quite a few good moves!).

We’re loading the videos as fast as we can on MyVeronaNJ’s YouTube site. But we are deeply indebted to VHS band parent Rick Foy (his YouTube site is here) for capturing the night’s signature number, “Thriller” and Michael Hardenberg’s moving “Celebrate Me Home“. Enjoy!