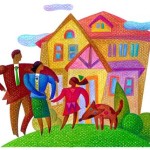 There is a light at the end of Verona’s real estate tunnel and it looks like this: The return of multiple offers and bids over the asking price.

Lenny Shriber, the broker/manager for Prudential New Jersey Properties‘ Verona office, says both were in evidence here in the first quarter, typically the slowest season of the real estate year. “Nobody does anything except look at the snow,” Shriber says.

But he sees plenty of reasons for optimism in the second quarter. Prices have stabilized and buyers are becoming more active. Houses under $500,000 are driving the market across the West Essex area and Verona has a larger potential supply of houses at that price point.

“We had fabulous months in February and March,” Shriber says. But sales don’t close as fast as they used to, so the activity of the last two months hasn’t yet showed up in his office’s statistics.

If you’re going to be buying or selling now, you should know that requirements imposed on banks because of the October 2008 financial market meltdown mean that 30-day closings are history. Unless you are a cash buyer, Shriber says, you need to figure 45 to 60 days to close.

David Mackey concurs. The Verona resident is the branch manager of the Cedar Knolls office of the Real Estate Mortgage Network, a full-service mortgage banker. “The criteria have gotten much harder,” he says. “You’re going to have to supply more documentation than you had to and they may come back to you two or three times for more information. You have to have every single piece of information you need in place.”

Mackey says that, because of this, it makes sense to sign up for a longer lock period on the loan–at least 45 days. And with rates fluctuating wildly lately, resist the impulse to game the system. “Last week, we lost a quarter percent in one day,” Mackey notes. “We got it back . But if you wait until the last minute you may not have enough time to get it back.” That could cost you more, every month and over the life of your loan.