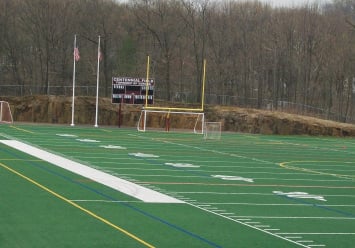 The Verona town council approved a new fee structure for the use Centennial Field that has the potential to sharply increase revenue from the turf field on the west side of town.

Effective immediately, rental rates charged to non-Verona-based individuals and groups have been doubled to $300 for a 4-hour period, $500 for an 8-hour rental and $1,400 for a full week. Rates for Verona-based non-profits remain unchanged at $150 to $700 for the same periods.

Recreation Department Director Jim Cunningham said the new rates better reflect the strong demand for the field, which borders Bloomfield Avenue. “I get multiple calls a day asking ‘How can I get on there’?,” he told council members.

Township manager Joe Martin told the council that Verona has also been approached by some college athletic programs interested in using the field. While nothing has been decided, this usage would occur in fall and spring during school hours when Verona teams are not on the field. Martin also indicated that Verona may entertain usage of the field after 10 p.m. because it is lit for night play.