Crock It! Barbecued Baby Back Ribs 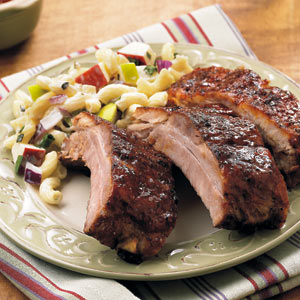 During the most recent Verona Family Night we debated: Take the kids out for dinner, or have dinner at home and just go out for dessert. Guess which won?

To really get into the spirit of family fun night, I  avoided the stress of making dinner at dinner time and went for my Crock Pot. It seemed the perfect opportunity to try a new rib recipe, as per a reader’s request.

Normally, when I make ribs in my Crock Pot I par-boil them on the stove first and then throw them in the pot with some barbecue sauce and call it a day. I’m so glad I didn’t do that tonight! I received a great recipe for Barbecued Baby Back Ribs and let’s just say this was so much better than what I normally make!

Notes from My Experience: