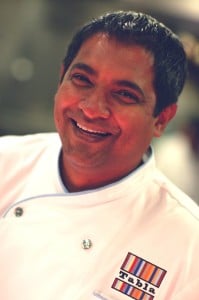 Indian cuisine might not be the first thing you think of when you plan a Passover meal. But Floyd Cardoz has made a career of surprising people with his cooking.

Cardoz, a native of Bombay, is the executive chef at Tabla restaurant in Manhattan, a restaurant that, like that of Carmen Quagliata, the Verona chef who was profiled here last week, is part of Danny Meyer’s Union Square Hospitality Group. This coming Tuesday night, March 30, Cardoz will be turning Tabla’s informal downstairs lounge, Bread Bar, into the “Unleavened Bread Bar” for its fifth annual Seder. And since Cardoz has called Verona home for many years, he graciously obliged our request for a preview of the menu, complete with our very first cooking video.

His “South Indian Stir-Fried Asparagus” is quick and easy, and you probably already have most of the ingredients in your pantry and fridge. I hadn’t ever cooked anything Indian at home, but I had everything except the curry leaves. At Cardoz’ suggestion, I made a quick trip to the Patelshah Indian Grocery, located in the Pio Costa shopping plaza in Fairfield. At his restaurant, Cardoz only uses asparagus from New Jersey, and he believes in supporting Garden State farmers. “We will get better produce in New Jersey and feed our kids better if we do,” he says. If you’re not an asparagus fan, Cardoz says the recipe can also work with other vegetables, like cabbage.

Cardoz became a Verona resident back in the 1990s, when he was the executive sous chef at Lespinasse (and my sister, Rosemary Gabbe, was one of his cooks). His wife, Barkha Cardoz, was not interested in city living and had a cousin who had a house for rent in Verona. The Cardoz’ then bought their first house in Cedar Grove, but sold it and moved back to Verona 6 years ago. “We always liked Verona,” says Cardoz, “the schools here are great.” Barkha Cardoz returns the compliment by being a frequent speaker at H.B. Whitehorne Middle School on Indian culture.

Tabla’s Indian-Spiced Passover Seder will begin at 6 p.m. Tuesday evening. The $95 price includes a multi-course feast and wine, and as of this writing, tickets were still available by calling 212-889-0667.

The recipe is below, as is the video, which was helpfully edited by my neighbor (and MyVeronaNJ reader) Mike Guerin. Enjoy!

Place a large stew pot over moderate heat. Add the canola oil. When the oil shimmers, add the mustard seeds and cook until the seeds pop.

Next, add cumin and curry leaves and cook for 10-20 seconds.

Add the garlic, ginger, chilis and onion, and cook, stirring for 5 minutes.

Add the asparagus and reduce the heat to low and saute for 8 minutes. Season with salt and pepper.

Add the coconut and turn heat back up to moderate and cook for 4-5 minutes.