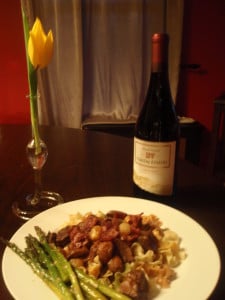 Any recipe that involves a full bottle of wine and relatively easy prep-work is going to get my attention. So in a world where plans changed and we unexpectedly didn’t get home from gymnastics until after 5 p.m. having dinner ready upon entry was great. This recipe took me about 35 minutes of prep work in the beginning and would have taken less if I had chopped vegetables the night before. Instead of chopping vegetables, I chose to read and go to bed early. My youngest likes to wake up at 5:30 a.m.

What’s Next:
1. Cook bacon in a 12-inch nonstick skillet over medium heat until crisp, about 8 minutes. Transfer the bacon to a paper towel-lined plate, leaving only 2 tablespoons of fat in the skillet. Refrigerate bacon until serving time.
2. Set heat to medium high and add onions, carrot, tomato paste, garlic, thyme, and 1/4 teaspoon salt and cook, stirring often, until the vegetables are softened and lightly browned, 10-12 minutes. Stir in the wine, scraping up and browned bits, bring to a simmer, and cook until the mixture measures about 3 cups, 10-12 minutes.
3. Transfer the mixture to the slow cooker and stir in the chicken broth, soy sauce, tapioca, and bay leaves until evenly combined. Season the beef with sale and pepper and nestle it in the slow cooker. Cover and cook until meat is tender, 9-11 hours on low or 5-7 hours on high.
4. About 20 minutes before serving, bring the frozen pearl onions, water, butter, and sugar to a boil in large nonstick skillet over medium high heat. Reduce the heat to medium, cover and cook until the onions are fully thawed and tender, 5-8 minutes. Uncover, increase the heat to medium-high, and cook until all the liquid evaporates, 3-4 minutes. Add the mushroom and 1/4 teaspoon salt and cook, without stirring for 2 minutes. Stir and continue to cook, stirring often, until the vegetables are browned and glazed, 8-12 minutes. Remove from the heat and set aside.
5. Gently tilt the slow cooker and remove as much fat as possible from the surface using a large spoon. Remove the bay leaves, stir in the pearl onion mixture, and season with salt and pepper to taste. Reheat the bacon in the microwave on high power until heated through and crisp, about 30 seconds. Sprinkle individual portions of stew with the crisp bacon before serving.

Notes From My Experience:
I took a stroll with my 2-year-old to Home Liquors and had good luck finding the recommended $7-$10 bottle of Pinot Noir. In fact I found 2 bottles, one for cooking and one for drinking. I had read that a meal can be truly enhanced when drinking the same wine as was used for cooking. For $8 a bottle, why not?

To feed a family of 5, I used only 3 pounds of meat and still had plenty of meat for all and some stew left over. With less meat, I also used only 2 onions rather than 3, but kept all other ingredient amounts as they were in the recipe. I also pulsed both the onions and garlic together in my food processor to save time and onion tears.

I’ve tried Minute Tapioca before with recipes from America’s Test Kitchen and have found that corn starch is smoother and works just as well. So I used 2 tablespoons of cornstarch and a whisk to combine (otherwise you could have clumps- think bad gravy…)

The meal was delicious and my kids enjoyed their “steak” and noodles.

Want to learn more about my Crock It! series? Read all about it here.