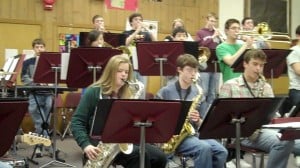 Now this is a reason to go out on a Monday night: The VHS jazz band, Verona Jazz & Beyond, will be performing at Cecil’s Jazz Club in West Orange on Monday, April 5 at 7:30 p.m.

Membership in Jazz & Beyond is by audition only and even if I weren’t a jazz band grad (trombone under Harry Owens), I’d be impressed by the group that Verona music teacher Max Morden now leads. Give a listen to Mike Basil’s guitar solo in “Category 4” below or Matt Tischio’s saxophone in “Lose The Shoes”. The band will also be playing “Chill Factor” by Greg Yasinitsky, “Off the Hook” by Jeff Jarvis, “Intersecting Lines” and “Ride the Wind” by Les Hooper and “Bang Bang” by Jimmy Sabater/Joe Cub.

The “Beyond” part of Jazz & Beyond refers to the fact that the band is often accompanied by vocalists that you’ve heard in other performances on these pages: Annie Palmer, Andrea and Gabi Latimer and Daisy Bourne, as well as Lauren Marden and Megan Smillie (that’s Megan with the sax in the front row above). Listen for them in Morden’s arrangements of “Respect” and Chicago’s “Saturday In the Park” among others.

There’s a $7 cover at Cecil’s, which is located at 364 Valley Road in West Orange (Valley is what Main Street becomes after the Northfield Avenue intersection). There’s a full dinner menu and Morden says the food there is “pretty good.”