The Making Of A Marine

Ever since Vincent Camerota was in the second grade, he would tell anybody who listened that he wanted to be a Marine. As he got older, he and his family would find Marine memorabilia for his room. And finally, just before Halloween last year, his family and friends came down Newman Avenue to ask neighbors if they would fly American flags and keep their front lights on overnight because, finally, Vinny was going off to Parris Island for boot camp. The illuminated flags were a moving sight, especially because Vinny had come close to losing his Marine dreams.

“Boot camp isn’t hard physically, you just have to get over the mental stuff and the non-stop yelling.”

If you lived in Verona three years ago, you heard some version of what happened. Vinny, then a Verona High School junior,  got into a brawl in the VHS parking lot that left one participant injured and a lot of lives in tatters, including his. He turned himself in after the fight and pleaded guilty to aggravated assault. Sentenced to 18 months probation and 150 hours of community service, he also had transfer out of VHS for his senior year. “There was no denying what he did,” says his mother, Cathryn Camerota. “I didn’t want my son to not be punished, but I wish he hadn’t been compelled to leave VHS and his town.”

He enrolled in Western New England College to play football, but on Christmas break 2008 he came home to tell his family he was going to try to join the Marines. Cathryn Camerota, who has given us permission to publish the quotes from her son’s boot camp letters you see here, thought the Marines needed to know everything about the fight. “I went to the recruiting office,” she says, “but everything I told them they knew already. My son had been completely honest with them from the beginning.”

“Send Hall’s cough drops if you can. Senior Drill Instructor said we can have them. He’s actually a real good guy, tough, but fair.”

Vinny waited for almost a year to enter the Marines, working two part-time jobs while the Marines pored over every detail of his background. “He was a really hard worker,” says Jimmy Hill, who hired him to work at Lakeside Deli. “To tell you the truth, I wish I had more kids like Vinny.” His departure date was to have been November 16, 2009, but the Marines moved it up with just 24 hours’ notice. “He called me at work,” says his mother, “and said, ‘they want me to leave tomorrow’.”

“I can’t wait to come home. I don’t hate it here and it’s not like I’m miserable, but it’s boot camp and who likes boot camp?”

At Parris Island, Vinny was cut off from his family and the outside world. For most of the three months there he didn’t even know date or day of the week. But he embraced the challenge of being a recruit, even the Crucible, the grueling final exercise that put the recruits through 54 hours of training with little sleep or food. “It didn’t surprise me at all that he became a Marine,” says Lou Racioppe, who coached Vinny in football at VHS. “We do a lot of conditioning in football and football is a game that you have to have a lot of mental toughness to play. I’d think he’d be the kind of person you’d want to have next to you if you were out there fighting as a Marine.”

“When we get home, we don’t have to do anything special. I just want good food.”

With boot camp graduation behind him, Vinny has moved on to the next phase of Marine training at Camp Lejeune in North Carolina. His mother says he wants to join the Special Forces unit, which means he will have to be at the top of his class. And even though he is a very new Marine, Vinny has already convinced two other VHS students to follow his path.

Molly Emiliani, the administrative assistant at VHS came to know Vinny during his time there and, commends him for turning his life around. “He could have thrown his hands in the air and said, ‘forget it’,” she says. “But he didn’t let that bad decision define who he was going to be.” She senses that more good may still come of that terrible night in the VHS parking lot. “He can be a role model to kids who have made a bad decision, to show them there’s a way back.”

“The training is not easy. If it was, everyone would be a Marine.” 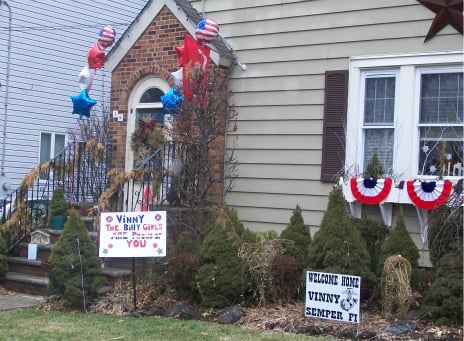 To dispel some of the rumors that have been swirling since Monday afternoon, the Verona Police Department has...