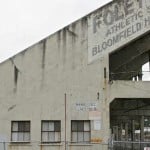 Bloomfield voters defeated a referendum to fix its Foley Field stadium. According to Baristanet, the vote means no home football games at Bloomfield in the fall.

Montclair’s town council approved the use of eminent domain to acquire a lot across from the Montclair Police headquarters for redevelopment as a parking lot. The land is owned by the Cerino family, which also owns the Decozen Chrysler Jeep Dodge dealership in Verona. The family has hired a lawyer to block Montclair’s action.

Caldwell business owners and residents are protesting a proposed parking ban on a stretch of Central Avenue. The Caldwells Patch is reporting that there have been several accidents on Central Avenue involving north-bound cars. But opponents say the ban would only encourage more motorists to speed through the area.

Last week, we told you about a bear caught and killed in Wayne. On Tuesday, the New Jersey Fish and Game Council unveiled a plan to hold a bear hunt this December, New Jersey’s first in five years. Former Gov. Jon Corzine had banned bear hunts.

And finally, the New Jersey state Senate approved a measure to allow wine to be shipped directly to customers. If approved by the state Assembly, the bill would let New Jersey wineries ship to customers out of state and would let consumers have wine shipped in.