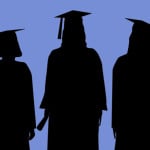 Every school year, a few weeks after mid-term grades come out, VHS upperclassmen learn their class rank. Juniors find out for the first time where they stand among their peers. Seniors find out which student has the highest GPA and will therefore be class valedictorian.

This year, the anticipation has been particularly pronounced. Two seniors, Erin Percevault and Nicole Robertson, both products of the same class at Brookdale Avenue School, are reportedly within a hundredth of a point or so of each other. Things were so squeaky close that the release of the final rankings were said to delayed by two weeks while the high school’s math minds double- and triple-checked the calculations. The valedictorian was determined to be Percevault, by a nose.

Which makes us wonder: At some point–one would think between a tenth and a hundredth of a point–isn’t the distinction between #1 and #2 rather arbitrary? And isn’t forcing a distinction a bit unfair? In fact, couldn’t the whole concept of selecting the tippy-top student feed an overly competitive, grade-conscious atmosphere that’s counterproductive to learning?  It’s probably too late to change the rules for this year, but it seems like a good time to revisit the high school’s policy.

We don’t mean to take anything away from the achievements of either young woman. Both have stellar minds and work ethics that do Verona proud. Nor are we taking issue with the education system that fostered their extraordinary records. But it seems that, when the mathematical results of their achievements are so close as to be statistically insignificant, choosing one over the other does neither the students nor the system justice.

If administrators at the high school choose to reexamine the process of choosing a valedictorian, they would not be alone. According to the Washington Post, many schools have become disillusioned with this old approach and have decided to spread the wealth: Anyone with a GPA over 4.0 becomes a valedictorian. That’s what they do at my nephews’ public high school in Michigan. The end result is numerous valedictorians, less competition, and a more positive atmosphere, because all A students are recognized for their academic achievement. Some schools, in fact, have eliminated ranking altogether.

Adjusting the approach to choosing valedictorians can also have the advantage of mitigating the problem of poor student speakers, since earning the highest average does not always translate into a natural speaking ability. At some schools, student speakers are student government leaders; those selected by student ballot, or even those who have earned the right through a speech contest.