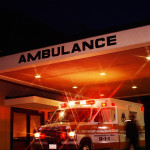 The crossing guard stationed near FN Brown Elementary School was hit yesterday around 1 pm as he concluded his shift crossing students and parents leaving school early due to the snow storm. According to Police Chief Doug Huber, the guard, whose name he could not specify due to medical privacy regulations, was crossing the street to go to his car when a pickup truck slid in the snow and hit him, knocking him down. The guard, who is in his ’60’s, was taken to University Hospital in Newark with a fractured hip. Further details were not available.