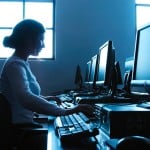 Verona High School and HBW Middle School sent e-mails to parents today notifying them that students at both have been using school computers to go on a “Facebook application site that allowed students to engage in inappropriate dialogue.” School officials said they have blocked access to the site from school computers and recommended that parents “speak to their children to see if they have visited the site and encourage them not to visit the site in the future.”

The e-mail did not identify the site, but it appears to be formspring.me, a social networking site where  anonymity rules and users offer up the right to “ask me anything.” Teens can connect to it through their Facebook accounts and use it for online conversations without revealing their identities. Those can be innocuous, but the temptation to use it for cyberbullying is strong. The media analysis site Gawker has compared it to crack: “evil, fun and addictive.” Less than a week ago, seven Pennsylvania teens were arrested for allegedly planning a “near riot” at their high school on formspring.me.

The appearance of the formspring problem comes despite VHS’ efforts to warn students about the dangers of cyberbullying. Last fall, VHS presented an assembly on computer attacks that was so potentially upsetting that Assistant Principal David Galbierczyk sent a Global Connect message to parents in advance alerting them to its content. In the assembly, the father of a boy named Ryan Halligan talked about how his son committed suicide after being bullied on and offline. An article on the assembly in the Fairviewer, Verona’s high school newspaper, ended with one student’s assessment immediately afterward: “People will think twice about what they say, or type, from this point on.”

Schools Superintendent Charles Sampson said today that, “Unfortunately, this is but the latest of various technological incarnations to which we routinely play catch up.”  And he conceded that thwarting problem sites is difficult. “If we forwarded each application that had been used to post and/or exchange inappropriate comments from student to student outside of the schoolhouse we would be unable to keep pace and would divert energies that are best spent on educating our students.”

VHS posted a note on its homepage this afternoon directing parents to OnguardOnline, a government-run site that provides tips for safe computer usage by students. “My best advice,” Sampson said, “is to remain as vigilant as possible in monitoring the computer activity at home, invest in quality spyware to negate access as much as possible to sites you do not want your children to visit and to ask lots of questions of your children regarding their computer use and to keep the computer in a family area where such monitoring is more readily accomplished.”

Ask your teen if he or she uses formspring. Registration is required in order to receive questions, but not to ask. You can see if your kids are registered if their Facebook page includes an invitation to “formspring.me” next to their status.