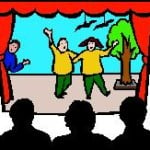 I love Broadway, but its ticket prices are not family friendly. So I’m constantly on the lookout for good, local theater for kids that won’t break the bank. One of the best opportunities comes the first week of March every year, thanks to the New Jersey Theatre Alliance and the New Jersey State Council on the Arts.

It’s called Family Week at the Theatre and this year, it runs March 6 to 14. Stages across the state will be hosting musicals, comedies , dramas, classes and workshops for kids of all ages. The organizers have put up a Web site that lets you find shows by age group, date, county, language and more. Some shows, like “Calvin Berger”–a new spin on the Cyrano de Bergerac tale–are meant for middle schoolers or older. Some, like “Lyle the Crocodile” are meant for the younger set. Some performances are free, but none of them cost anything close to a Broadway ticket.

Verona’s own Pushcart Players will be offering several performances, including “Peter and the Wolf” on Saturday March 6 at the Shea Center for the Performing Arts, which is on the campus of William Paterson University in Wayne. Kids tickets are free for this performance, and adults are just $9. We saw this one two years ago during Family Week, and loved it. The Pushcart troupe will perform “Cuentos del Arbol”, a Spanish-language show based on Hispanic folklore,  on Wednesday March 10 in Newark, Thursday March 11 in Paterson, and “Stone Soup” on Sunday March 14 at the Grounds for Sculpture in Hamilton.

There are many other family-friendly performances, and some run through March 21 as part of the Theatre Alliance’s larger Stages Festival. You can get information on all of them here.

The Verona Lions Club has kicked off its big fall fundraiser, the 50/50 raffle. The winner receives 40% of...