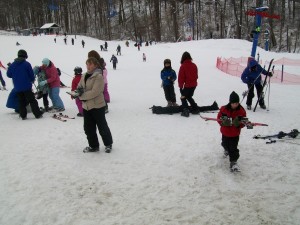 The last few winters haven’t been particularly kind to ski resort operators in New Jersey. While this year’s snowfall isn’t much, it’s enough that you can consider heading to the mountains of the Garden State rather than to those of our neighbors to the north.

So on Wednesday, we headed to Hidden Valley in Vernon, just about a 45-minute drive north of Verona. It’s not anywhere as big as Stowe, Killington or Waterville Valley, heck, it’s not even as big as its neighbor Mountain Creek. But that’s sort of the point. Hidden Valley is a low-key family place where even the littlest kids can learn to love downhill skiing–and their parents can fumble along too. The one-hour lesson (for beginners and intermediates) was just enough to get everybody’s skis pointed in the right direction. And the kids loved the fact that the beginner hill is called Chicken Delight.

“You can jump in your car, come up for the afternoon, ski and go home,” says Michael Bartone, membership director of the Hidden Valley Club, a golf club-like organization for the mountain formed in the fall of 2008. “If the kids have a meltdown, you haven’t driven five hours to get here.”

Membership is an intriguing option, since it lets you bypass the lift lines and gives you complete access to kids’ ski lessons, among other benefits. But you don’t have to be a member to ski at Hidden Valley and a day here won’t break the bank: Lift tickets, rentals and a lesson on Wednesday came to $76 per child, not much more than the price of a lift ticket alone at the bigger resorts. Weekend kids’ learn-to-ski programs for skiing or snowboarding are just $74 for a half day or $98 for a full day, with rentals for only $10 more. There are also weekend and weekday lesson programs for adults. 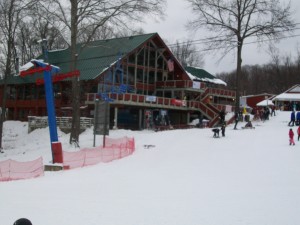 Just don’t let the family friendliness fool you into thinking that Hidden Valley has no challenges. It is the home mountain for the New Jersey Interscholastic Ski Racing Association, and the site of all high school races in the state. Nolan Kasper, a member of the Hidden Valley Race Club, is now competing for the United States at the Winter Olympics in Vancouver, and one of Race Club’s coaches is also the coach for team Argentina. Hidden Valley was also the home ski area of Donna Weinbrecht, who won a gold medal in moguls skiing at the 1992 Winter Olympics in Albertville, France.

So what’s the downside? The arrival of the high school racers after school raises Hidden Valley’s energy level; if you have small kids, it’s best to go in the morning. It would also be nice to be able to reserve lessons and equipment online to make sure that your trip to Hidden Valley is not in vain.

Small quibbles, all in all. Weather permitting, we’ll be back.