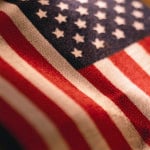 There’s a nice little feature in The Star Ledger this weekend on a company that, for many years, has been the industrial base of Verona: Annin Flag.

Ask a long-time resident, and they will probably be able to give you the name of somebody they knew who worked there. As a kid, it seemed to me that most of my Aunt Rose’s friends were seamstresses at Annin. One of the giant flags that flew from the George Washington Bridge was displayed in the old gym at VHS before it was flown and it covered the floor. But if you’re a newbie to town and the Annin name doesn’t ring a bell, look to the right as you drive east on Bloomfield Avenue toward Montclair. Annin is the multistory building just past the Verona Fire Department station.

The story, which is inexplicably datelined from Newark and not Verona, does a good job of relating the history of Annin. It also points out the other reason why you may not be familiar with the company: Annin, which now has its headquarters in Roseland, also has factories in Virginia and Ohio.

If you click through to Annin’s Web site, you can see pictures of those sprawling one-story facilities and see that the company describes them as “modern”. It doesn’t take much reading between the lines to understand that the Verona plant isn’t. From time to time, there have been rumors in town about what might happen to the building if and when Annin decides Verona is no longer in the corporate cards. It’s easy to imagine the building reborn as artist lofts, like the GoggleWorks Center for the Arts in Reading, Pa., which I wrote about for USAirway’s inflight magazine. But that, as they say, is for another day.

You can read the The Star Ledger piece here.