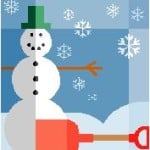 Early today, our friends at Baristanet jokingly canceled Wednesday but it seems more than likely that we will, finally, be getting a big snowstorm tomorrow. The National Weather Service has issued as Winter Storm Warning, calling for a heavy snowfall, beginning late tonight and lasting into tomorrow. It is predicting a total accumulation of 8 to 12 inches.

New York City has in fact already called off school for Wednesday, and Montclair has scratched its trash pick-up. New Jersey Transit has canceled its Access Link service and it is asking would-be commuters to check this page for transit updates. For information on major highways, use the New Jersey Department of Transportation’s 511 service.

And fair Verona? The Wednesday northside bulky/white goods/metal garbage collection is still on as of now. But C.H.I.L.D. has called off the afternoon book reading by author Jane Lovascio. The only sports event on the calendar is a VHS girls freshmen basketball game against Montclair at HBW. But if school is called, that will be a scratch too.

Contrary to the rumor that has been going around, the Verona public school system’s Global Connect phone alert system is up and running, so if there’s an early morning call to call off school, you’ll get it. Or you could just turn the ring tone down, sleep in, and check MyVeronaNJ.com when you wake up.