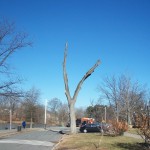 If you were in the park on last week’s balmy Friday morning, you probably noticed that the long, sad process of felling several very large trees was underway.

The Verona Park Conservancy, a group of  volunteers, has undertaken a large-scale project to preserve as many of Verona Park’s old-growth trees as possible, remove those that present a hazard, and start planting trees for the future. The VPC works hand-in-hand with the Essex County Parks and Recreation department, which contributes labor, funds and consultants, and a number of trees for the upcoming year.

But the VPC would like to purchase a minimum of 100 new trees for 2010 to initiate its Tree Restoration Program.  It hopes that the funds for this project will come directly from community and business contributions. 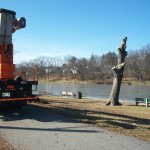 “Most of the park’s majestic oak, fir and birch trees were planted 75 or 100 years ago and are in their twilight stage,” says  Deborah Jacobsen, horticultural chair of the Conservancy. “What you are seeing now is just the tip of the iceburg.”

The VPC recently set up a Tree Restoration Fund for donations dedicated to the planting and maintenance of a new generation of trees for the park .  The VPC’s Web site is set up to take donations, beginning with as little as $25 and going up to $500. 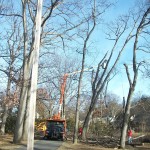 This is not about saving the Climbing Tree, whose decline we wrote about in December; no amount of money will do that, unfortunately. But much as a celebrity lends his name to a worthy cause, the Climbing Tree’s fame can perhaps inspire the creation of a new generation of welcoming trees. The VPC would like to plant not only a new fagus sylvatica, the same species as the Climbing Tree, but trees and shrubs that were on the original Olmstead Brothers plan for the park but never planted.

For more information, or to volunteer,  e-mail the VPC. If you’d prefer to put a donation  in the mail, the address for the Verona Park Conservancy is PO Box 143, Verona, NJ 07044.

A previous version of this story misstated the role of the Essex County Parks and Recreation Department in the Tree Restoration Project.