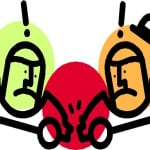 Talk about your perfect storm. A dusting that at any other time would have hardly been noticed caused major difficulties on Verona’s roads this morning, coming as it did at the exact time parents and commuters were heading to school and work.

Every mom at school pickup seemed to have a fender-bender story from the morning:  One car reportedly skidded down Pease Ave., across Lakeside, ending up in Verona Park; another was stuck in the middle of Bloomfield Avenue, near the park. The steep road to the high school, Sampson Drive, was nearly impassable, with parents stopped on the way up to let their kids out to walk up, rather than risk the slippery slope.  And two cars were involved in a fender-bender on Oakridge Road at the Fells Triangle:  A police car closed it off so cars coming off Bloomfield had to squeeze right onto Fells Road.

The National Weather Service had predicted the snow, but it downplayed it so much that Verona was caught off guard. The town’s salt spreaders didn’t get out until after nine, which is a bit like closing the barn door after the horse is out.

“The forecast missed badly,” said Charles Sampson, Verona’s superintendent of schools. “There was no opportunity to call for a delay as the commute was already underway so a closure or delay was impossible. All area schools were in the same unfortunate situation.”

This is one time when we could have used a little more hype from the TV weatherman.