The Hunchbacks Of HBW 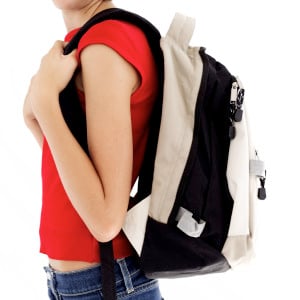 You’ve seen them trudging along Bloomfield Avenue on their way to and from the center of town. Backs bent, heads down, watching the pavement instead of the traffic: The hunchbacks of HBW.

The homework gets heavy once a kid gets to middle school, and I don’t mean only in terms of intellectual gravitas. It’s not unusual for a single book to top 5 pounds in weight. If your kid has English, Science, Math and Social Studies homework on the same night, that’s 20 pounds of material in the backpack. Experts say a child should carry no more than 10% of his or her body weight to avoid back and neck problems. So a 20-pound pack  would be fine if your child weighed 200 pounds, but most middle schoolers don’t. Mine certainly doesn’t.

The administration at HBW, Principal Yvette McNeal and Vice Principal Jeff Monacelli, is sympathetic. But there’s only so much they can do. The middle school lockers are too narrow for wheeled backpacks, and the mom in me suspects that, even if they were, it wouldn’t be cool. Some years you can get lucky: Last year’s fifth-grade class was small enough that the kids got extra copies of books to keep at home. And sometimes, course materials are accessible on line. Some years, your luck runs out, like mine did this year.

The environmentalist in me resists joining the clutch of cars idling at Walgreen’s or HBW at 3 p.m. to pick up kids and backpacks. After all, one of the things that’s so great about Verona is that kids can easily walk home from the elementary schools and the middle school, which is conveniently located smack-dab in the middle of town.  So, to keep my kid healthy, this weekend I did what has become standard practice for middle school moms: I went on Amazon and bought about 10 pounds of used textbooks.

Here’s hoping that the improved school technology that the Board of Ed is promising includes e-textbooks.