Skating: Kudos To The County 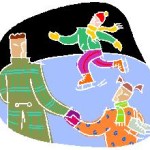 Even if you didn’t see the  “No Skating” signs at the entrances to Verona Park  Saturday morning replacing the more welcoming “Skating Today” signs  of last week, you surely surmised that the the 40-plus-degree temps of Saturday and the driving rain of Sunday mean that the skating party’s over–at least for now. Though we haven’t given up hope that there will be more turns on the frozen ice of Verona Park lake yet this winter, we want to end a glorious  week of skating and camaraderie with thanks to Essex County Executive  Joseph N. DiVincenzo Jr., Parks Director Dan Salvante and his staff for making the fun possible.

Every day, from 9 a.m. to 9 p.m., the boathouse was transformed into a cozy skate hut, with a cheery fire in the enormous stone hearth, rubber mats and benches for skate changes, and a rubber-lined wooden ramp connecting boathouse and ice. Portable lights and a generator lit the ice for night skating. Many people took advantage of the opportunity: Moms met for a peaceful skate during the school day, kids convened after school, some with skates and some without. On the weekend there were two or three hockey games going on at all times; kids of all sizes and abilities skating (some beginners used the plastic deck chairs for support), a man zipping around the periphery with bonafide speed skates, and several dogs, all having fun on the ice.

Speaking of hockey games, we do have a few suggestions for improvement for the next time around. For one, it would be great if a wider area were clean and cordoned off, so a section could be designated strictly for hockey. It was hard for figure skaters to dodge the flying pucks–and hard for the hockey players to avoid “checking” the figure skaters. And maybe some skates could be brought from county-owned South Mountain Arena (now the Richard J. Codey arena) to the boathouse on temporary loan–so the kids in shoes could partake. Because, trust us, it’s a lot more fun on skates.